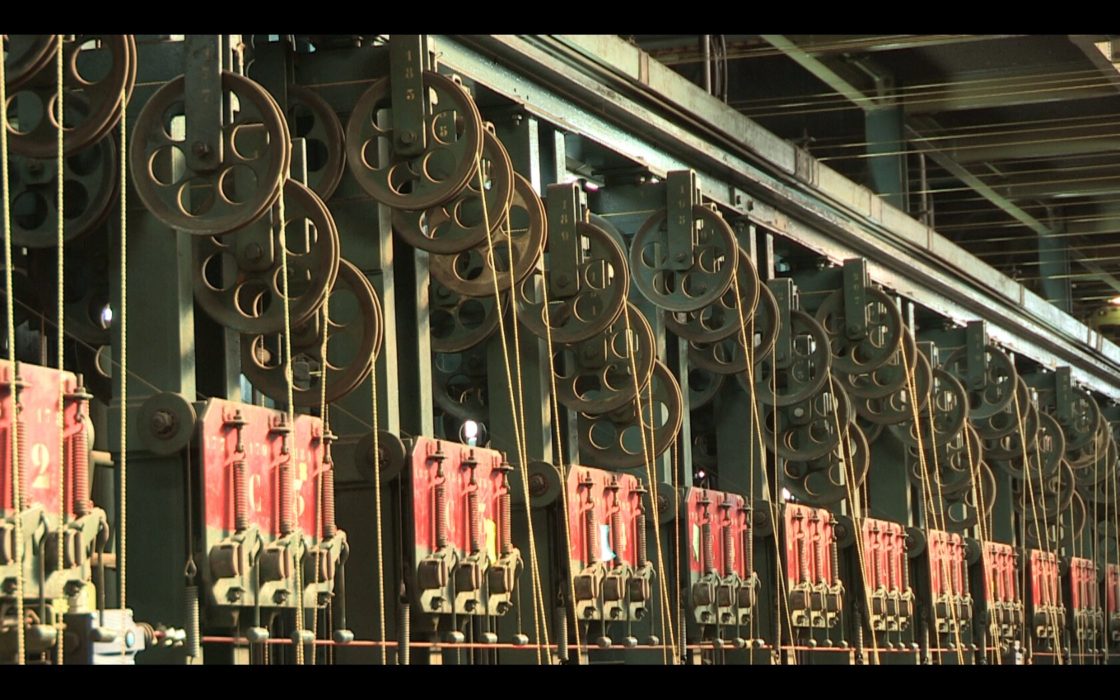 The Semperit plant in Argenteuil. Faced with the molten rubber, bodies engage with the cogs
of the machines. The hammer drops: off-shoring. Then a symphony pursues the account: rising
from the destruction of the machines, of the walls…and of a surprising community.

“We won’t give an inch”… There’s a handful of them, thirty, fifty perhaps, no more… The music of HK resonates loudly on the last round. They sing, yell at the top of their voice, but their faces are marked. By the work of many years in this rubber factory in Argenteuil, by a struggle running out of steam, by the worry of jobless days lying ahead. It’s the 21st century and we remember the time when cinema’s beginnings sang with the early 20th century to celebrate industrial inventions – symphonies to the glory of machines. We also remember when an activist cinema emerged to join the workers’ struggles in the 1970s – epic stories to the glory of men. In the empty factory where a few workers linger in their everyday clothes as they would in a village square, the only images remaining from the previous century are those conjured up by the sparse words, sparse work gestures and sparse machines still operating, as if suspended, which the filmmaker shows us with parsimony, restraint and sensitivity. For Luc Decaster, a politically engaged filmmaker who has been filming workers’ struggles for over twenty years, it is important to continue filming, continue bearing witness. Without excessive nostalgia. The vestiges of work and the creeping emptiness, then little by little the disorder, the abandonment, the post-industrial world and the disappearance of a landscape destroyed by hydraulic shovels, grapples for concrete and scrap metal. Another symphony is playing out, in tune with our century, before all is erased and we forget everything about the working classes.

Luc Decaster grew up in Saint-Nazaire, the “French ship-building capital”. During his teenage years while he was preparing for his Industrial Boilermaker’s Certificate, he was marked by fierce strikes, the confrontations between laborers from the Atlantic shipyards and the riot police. Having become an industrial draftsman with Chausson in the Paris region, he discovered the Taylorism of the press shops from behind the wall of the research department: the calloused hands and gaunt faces of the skilled workers on the assembly line. At the same time, he began studying history, and focusing on research into the labor movement. Then he became a history teacher. He went back to school to study film. In 1991, he stopped teaching and made his first films around Argenteuil, where he lives: films that evoked, without compassion, snippets of the lives of the people near to him. Those forgotten by history.