Robert, Simon and Sophie live on the Channel coast with their daily routines. Nessim enters their life, followed by the teenagers Ahmed and Mohammed, who are threatened by the political situation in Africa. All of them crossed the Mediterranean to seek refuge in France. They all live together in Normandy for one summer.

Audiences familiar with Creton’s films will recognise the garden and filmmaker’s home which, for one summer, becomes the stage and set where life is again transfigured into comedy. With Flora, youth bursts into the house, breathing its tremendous energy into the film with a pop music bloom echoed by tracks from Les Limiñanas. And the youth of Ahmed and Mohammed, two young migrants who have ended up in Normandy and with whom Simon and Robert share their roof and life. The radiant, sensual insouciance of the “children” and the music provide a counterpoint to the slower, more serious and questioning approach of the adults. Sophie keeps loneliness at bay by observing Simon and Robert as they expose their relationship to the risk of Nessim, the African lover who has survived Calais and the demolition of “The Jungle”. Since La Vie après la mort (FID 2004), Creton has turned his home into an echo chamber of the world, a refuge for an experimental utopian counter-society of caring, humility and gentleness. By taking care of children, the adults learn to live with their wounds and their desires. By watching how adults live, the children learn how to weave together life and death. This fabric has never vibrated with so many nuances and contrasts as in this Bel Été. Of Pavese’s eponymous novel, the film has kept only its rawness and a lucidity devoid of naïve optimism. Whatever cynics may think, everything here is true, everything has been experienced and tested before being reinvented for cinema. Without discourse or slogans,  Le Bel été applies the most concrete of policies: through the example of a lifestyle and existences risked in common, in an openness to encounters and adventures. 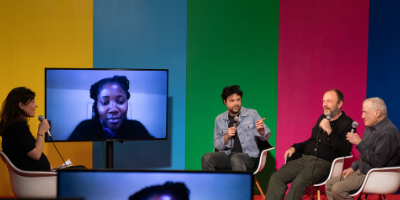