“I met Jean Lambert one year after my arrival in Bénouville, in 1992….Before we met, I used to see his house, his farm, and wondered who could be living in such a mess, amidst such neglect. I had prowled around a lot before approaching him, for months. The day I decided to go and see him on the pretext of buying milk, I cycled from Bénouville with my empty milk bottles. On the way, the police stopped me to ask where I was going. What a coincidence! Just when I already had the feeling that I was doing something shady: having prowled around and fantasised about this place and this man whom I didn’t even know… Jean Lambert gave me the milk, pointing out that there were other farms closer to where I lived. The most difficult step had been taken….I went back to have dinner with him once a week. I’d arrive around 7pm and leave around two or three in the morning, always on my bike, often drunk….Later, I suggested that we make a film. He found the idea amusing, even though he mistrusted cinema. ‘You’re wasting your time, poetry is the only good thing.’ He died in April, the year of the eclipse….I finished the film I’d begun with him, without him.” 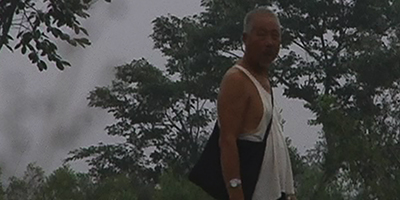 Deng Guo Yuan, in the garden 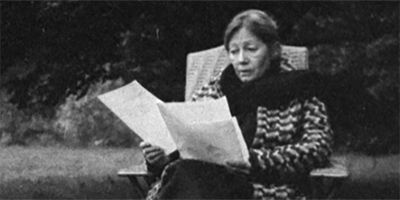