For a Manifest Hospitality

In 2020, Image de ville and PEROU launched a call to filmmakers aiming to gather together short films likely to reflect the power and extent of the hospitality that some of our contemporaries are today extending to migrants. The main purpose is to flesh out this PEROU-led initiative, which seeks to have the act of hospitality recognised as Intangible Cultural Heritage of Humanity: among other things, the UNESCO procedure requires the presentation of a “5–10 minute edited film”. Yet, this call to filmmakers is more than just a request to the international organisation. It also opens up the prospect of a collection of films bearing witness to what is being built, invented and affirmed today to assist migrants in Europe. The creation of a “hospitality film library” is thus taking shape, one without walls, whose function would be to build up and transmit through film the history of the “popular front(s)” of civil society’s hospitality. On 16 March 2021, Cinéma du réel will present a selection of the films already collected and will open the debate on how to reformulate the call to encourage the emergence – again, tomorrow – of “films that are lacking”.

1) Sepideh Farsi (5’56)
In Pipka, a self-organised migrant camp in Greece, women are cooking for the victims from the neighbouring camp of Moria, which has burnt down. One of them, an Afghan woman having lived in Iran, talks about her destiny as an eternal migrant.

2) Isaki Lacuesta (5’54)
Ghost-like and persistent, bodies from elsewhere are present in the spaces and shadows of our daily lives.

3) Emmanuel Roy (1’59)
In a theatre workshop in Beirut, learning in silence how to meet the other, and oneself.

4) Le Match Régis Sauder (3’49). Two teenagers, one black and one white, watch and comment on a football match on a smartphone screen belonging to one of them.

5)Occitane Lacurie (4’45).
On a computer screen, composite archives of a place of hospitality, now gone, the City Plaza in Athens.

7) Excerpt from Muriel Cravatte’s Demain est si loin, documentary – 2020. (4’40)
Members of an association that shelters migrants in Briançon; during party in the mountains, where they give an account of commitments and difficulties in providing hospitality. 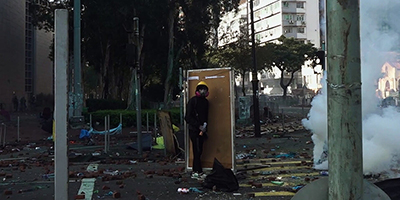 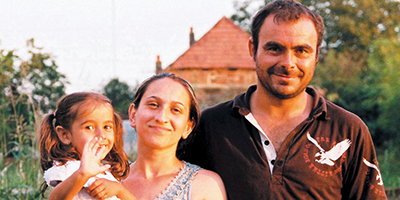