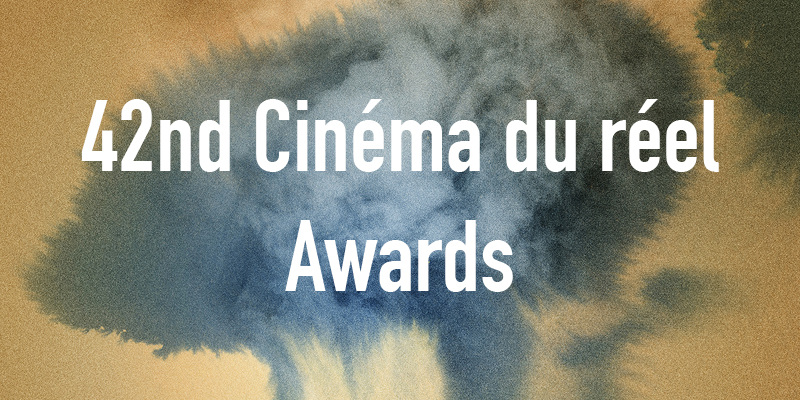 Despite the Covid-19 health crisis, Cinéma du réel has decided to keep the festival and its awards alive online.

AWARDED BY THE FEATURE DOCUMENTARY JURY :

CINÉMA DU RÉEL GRAND PRIX Funded by the Bibliothèque publique d’information (€ 5,000) and the Procirep (€ 3,000), and awarded to one feature film from both International and French Selections

A great epic of the spoken word in a post-Franco and post-industrial-crisis Spain, where the same bar is filmed, evening and morning, as a Noah’s Ark AND tower of Babel, the film is akin to a stained-glass window, shaking up temporalities, a dissonant, albeit magnificently cadenced choir, a patient, generous and formally admirable work. __

SCAM INTERNATIONAL AWARD €5,000 funded by La Scam, is awarded to a feature film from the International Selection

The filmmaker manages to move us with a forceful, simple film. His protagonists’ deep humanity coupled with powerful and rigorous cinematographic work impressed us. Made in the Central African forest, the film tackles universal themes with finesse and complexity.

INSTITUT FRANÇAIS – LOUIS MARCORELLES AWARD Funded by the Institut français (€ 5,000) and awarded to a mainly French production feature film from both International and French Selections

The splendid energy of the film and its protagonists plunges us into a Caracas neighbourhood with a story that has a rare force. The figure of a woman fighting adversity with generosity and dignity is truly magnificent. The film touches on complex and universal issues and opens the door to hope with its masterful narration. Special Mention to  THERE WILL BE NO MORE NIGHT (Il n’y aura plus de nuit) by Eléonore Weber 2020 / France / 75’

The Feature Documentary jury gives a special mention to There Will Be No More NightbyEléonore Weber, a disturbing documentary in which Blackness is both subject and material, night is a reversible space and war, above all, a length of time. An impressive plastic work, the film installs a dizziness and sows doubts about itself, like the reflection of stars on water. __

ORIGINAL MUSIC AWARD Funded by the Sacem (€ 1,000), is awarded to the composer of a film from both International and French Selections

An Da Shealladh (The Two Sights) is a film by the filmmaker and acoustician Joshua Bonnetta, whose splendid abstract score, mid-way between a field recording, psalm and restless melody, in itself creates a whole world haunted by animals, ghosts and phenomena, on an equal footing with the images.

The Feature Documentary jury gives a special mention to Phil Collins’  Bring Down the Walls, whose soundtrack is here again an integral part of the film, since the very joyous House Music classics that make up the track not only impart rhythm to the film throughout, but also create a good half of its fever, stoke its militant fires and turn its rhetoric into a party.

LORIDAN-IVENS / CNAP AWARD Funded by CAPI Films (€ 2,500) and the Cnap (€ 4,000), is awarded to a first feature film from both International and French Selections

For the observation of a family going about their daily life, akin to a home-movie, becoming the story of the making of the film itself, staging the representation of what’s true and false, of the documentary image and its fictional flipside, like an unexpected upsurge of fiction in the film. Ultimately, what we have here is a film pursuing those unique moments when cinema can produce itself.

For the extraordinary exploration of archives and the brilliant anthropological and political essay that this film constitutes. The jury also commends the radical approach to a cinematographic language capable of leading the spectator into a sensory immersion where the darkness invites us to discover the missing images. __

SHORT FILM AWARD Funded by the Bibliothèque publique d’information (€ 2,500) and awarded to a short film from both International and French Selections

For their joyful exploration of all the possibilities of reality and their visionary uniqueness, be it by hijacking a video game or through the siloed exploration of the deeply human and subversive character of rebetiko . The jury saw these two films as two sides of the same coin, combining the different political and aesthetic strata of a single territory. The mythical past, the diaries and the possibility of  an elsewhere are convened here in an astonishing and audacious manner. These two films form a brilliant diptych that calls on us to reflect on contemporary cinematographic language.

This mention is given to the film Reserve for its experimental approach to the representation of nature proposed by the film, its ironic and disturbing character, and for its reflection on the consequences of humans’ action when they interfere with nature by dominating it.

TËNK SHORT FILM AWARD Funded by Tënk (5,00 € and acquisition of SVOD broadcasting rights on the platform Tënk) and awarded to a short film from both International and French Selections

Building on archive and computer-generated images depicting the changing architecture of football stadiums, this film combines an aesthetic, political and social approach. As an astonishing and disturbing vision of the evolution of society itself and of the way in which we are all tied to one another, the film highlights the growing commercialisation of a spectacle that ultimately betrays its working-class origins.

AWARDED BY THE YOUNG JURY :

CINÉMA DU RÉEL YOUNG JURY AWARD Funded by Ciné + (€ 15,000 as an acquisition of broadcasting rights) and awarded to a feature film from both International and French Selections, for its theatrical distribution

This festival marathon has been like no other, as you can well imagine.

We were unable to watch the films in the magical immersion of a film theatre, which of course is frustrating. On the other hand, we decided to meet virtually and comment at length on each of the films. I was impressed by the seriousness with which all the members of the “young jury” handled this exercise And by the generosity of their gaze. I found it so enriching to share these discussions with them; their different sensitivities and perceptions, but also their great aesthetic, political and cinematographic rigour.

Through all these films, this confinement reminds us that the world was already ailing. But the characters who are struggling, rebelling, questioning give us hope. As do the filmmakers who give us food for thought through their films. More than ever before, we felt that art is precious not only for what it reveals about the world, but also for the close company it offers us at this unprecedented time.

The deliberation was not simple. For the jury, each film had its raison d’être and relevance. The choice was a painful one, and they wished they could have given awards to more films. But only one could be kept. So I hand over to them to express their choice. Catalina Vilar

The Young Jury–Cinéma du réelAward is funded by Ciné+ (€15,000 as an acquisition of cablecasting rights from a distributor) and awarded to a feature documentary from the Competition for theatrical exhibition.

The choice was not an easy one. Torn, overwhelmed and intrigued by so many films and different forms of expression, we finally managed to agree on this strange, poetic and innovative film: There Will Be No More Night. The film constantly challenges our relationship to reality. What do the images show us? What multiple realities do they reveal? By shattering the supposed objectivity of images of war, the film invites us into a hypnotic experience. This produces a curious paradox: a continuing expansion of our vision that ultimately impairs our visibility.  There Will Be No More Night is a shock. The film gave us a lump in our throats and we came out of it troubled.  By challenging our place as a spectator of these images, Éléonore Weber seems to summon the powers of cinema in face of this war of what is “seen” and what is “visible”. We chose to give it our Young Jury Award as we considered it to be both a magnificent and necessary film that shows a certain reality of war and its horrors, while plunging us into the pilots’ sensory and psychological experience, by putting us in their position.

AWARDED BY THE LIBRARY JURY :

LIBRARY AWARD Funded by the Direction générale des médias et des industries culturelles of the Ministry of Culture (€ 2,500) and awarded to a film of more than 50 minutes from the International Competition. The awarded film is purchased by the Bibliothèque publique d’information for inclusion in the library’s Catalogue national – Les Yeux Doc

With the ongoing confinement and extremely difficult overall situation, which have made for unprecedented and extremely complicated viewing conditions, two films stood out due to their cinematographic strength and the humanity of the stories that they invite us to share. The Library Jury of the 42nd edition of the Cinéma du réel has awarded the two following films: Makongo, by Elvis Sabin Ngaibino: with its tenderness and humour, this film helps us to discover a salient reality. Opening up another view of the Aka people today, this film tackles complex challenges, including the universal issue of education, and helps to convey a vision of Africa that is neither overbearing nor condescending. For all these reasons the film was unanimously chosen for the Library Award. The Year of the Discovery, by Luis López Carrasco, whose precise theme addresses today’s universally relevant subjects with a courageous cinematographic approach. Captivating and deeply moving without falling into pathos, the film manages a subtle exploration of an entanglement of stories about resistance, workers’ memories and solidarity and, as such it has been unanimously chosen for the Library Award.

A subtle and personified proposal about the revival of ancestral practices and the meaning to be (re)found in them, at the risk of loss and losing oneself.

Be it for vine-growing or music, the contribution to intergenerational transmission gives a feeling of continuity and identity to this micro-community, made up of the two endearing and complementary figures of go-betweens, Titou and Soledad.

An in-depth questioning of the very nature of intangible cultural heritage, the film draws its strength from a captivating singularity, perfectly in harmony with it subject.

We have given this award to a film that is both political and human and whose images and meaning can be understood by all. The film has an educational dimension and involves an interesting subject: it reminds us that football has its roots in the working class.

The computer-generated images, which in other contexts could seem cold, here place the virtual at the service of reality: they highlight testimonies and, by contrast, give more impact to the real-life images. The story of a Liverpool resident who speaks with a moving sincerity, conveys the human side of football matches: many people go there for the atmosphere and to experience a shared collective energy. This film is full of emotion and the question of how spectatorship is evolving socially is very interesting: this touches on the political context of football, and its place within the capitalist system. This means more is a reflection of society: you start with people and you end up in the business world. It is on this specific point that we feel the personal commitment of a filmmaker who has given us a film with some striking images that remain in our memory.

“This means more”  could be an excellent definition of the creative documentary: there is always something more to see and more to understand than one thinks.

Since last year, a new First Window section covers the first documentary gestures, the first tentative and fragile steps of budding young filmmakers. But these steps are bold and full of promise. The films were selected by a group of students in collaboration with the selection committee and the festival’s artistic direction. They were viewed online on the Mediapart website, where viewers were able to vote for their favourite film.