The residents still have some time to pack up and leave the White Buil­ding, one of Phnom Penh’s last modernist building. This apartment block was re-occupied by an artistic community and their families after it had been abandoned in April 1975 when the Khmers Rouges seized power and deported the capital’s inhabitants. Recently, the building has been bought by a Japanese firm, with support from the Cambodian government. Shelves are emptied, walls collapse. Behind the cupboards that are removed, wall paintings appear and show a long collective history. For some the evacuation smacks dangerously of Pol Pot’s regime’s modus operandi and leaves people wondering where the collec­tive has gone, where the strength to fight has gone. Yet, in the corridors, in people’s gazes, in their way of inhabiting the place, this strength is everywhere. Despite the movement of departure, the film reveals a tight-knit community. The discussions in the halls, the way of occupying shared spaces do not deceive – the place is marked by the history of a group and sharing.
The film records a dismantling and builds a memory. The filmmaker, who grew up in the White Building, follows his family and other residents as they clear the premises, remember and reminisce. They find photos, carry off windows and doors, frag­ments of what enabled them to mix and create ties. Everything is dis­persed, the filmmaker holds firm until the dust makes it impossible to breathe and wooden panels block the building’s openings to prevent more excluded people from entering.
–Clémence Arrivé

Kavich Neang, director and cine­matographer, was raised in Phnom Penh. His first two shorts were documentaries produced by Rithy Panh: A Scale Boy (2010), and Where I Go (2013). In 2015, he directed two short fictions, Three Wheels (premiere: Busan), and Goodbye Phnom Penh. In 2018, his short fiction, New Land Broken Road, premiered in Singapore. 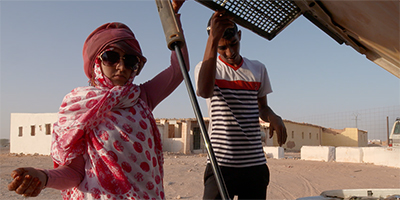