“Sacred ground. A transcendent space of communion where young people could be found listening to music, talking politics, dancing, flirting, living in their fullness. This film pays tribute to the Black Bus Stop, an informal yet iconic gathering spot for black students on the campus of the University of Virginia, Charlottesville in the eighties and nineties. Young people could be found there listening to music, talking politics, dancing, flirting. Today, under the glare of the moonlight, black fraternity and sorority members reclaim these hallowed grounds as they chant and sway to the rhythms and memories of the past.
– Claudrena N. Harold

Kevin Jerome Everson was born in 1965, Mansfield Ohio. Since the 1980s he has directed a little over fifty short films, and three feature lengths. Most of these are anchored in the collection or staging of gestures, postures and attitudes of the black American working class.

Claudrena Harold is a professor of African American and African Studies and History at the University of Virginia, Charlottesville. In 2013, Harold started collaborating with her colleague and filmmaker Kevin Jerome Everson.

Music From the Edge of the Allegheny Plateau 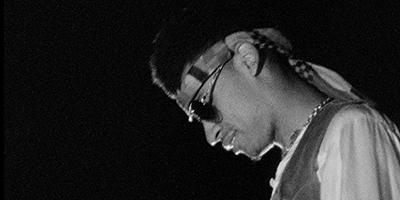 How Can I Ever Be Late