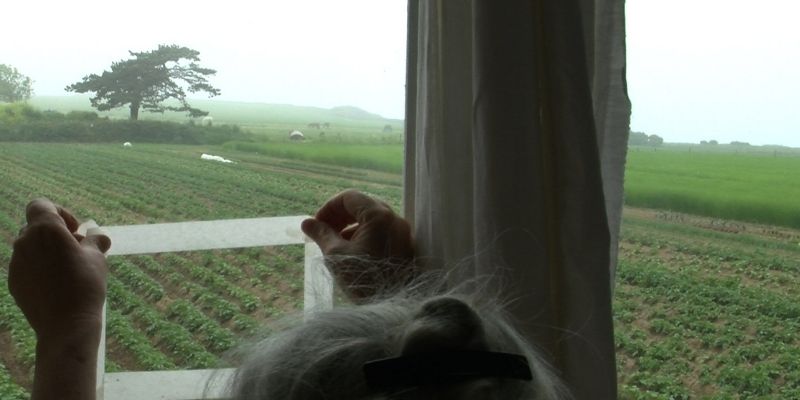 Farms and gardens, and the labour of those who cultivate them, have occupied a revered place in the cultural imaginary since ancient times. Film is no exception. A moving, noisy historical testimony, film can offer a vivid representation of the power of the pastoral. Film can do this in several ways, from politicising a landscape’s territorial aspects, to romanticising its picturesque ones, and from mining land for psychic allegories, to documenting its cultivation as a form of hands-on environmental activism. I call this type of film, Land Cinema. ‘Cineaste en son jardin’ celebrates several such examples, from Pierre Creton’s Normandy farm chronicles to Rose Lowder’s optical experiments filming flowers in Avignon. What unites Creton and others in their turn ‘back to the land’ is a shared dissatisfaction with mainstream society and politics, city life, and commercial art and filmmaking.

For many, including Lowder, Margaret Tait, Anne Charlotte Robertson, and Robert Huot, this turn happened around 1970, which is no coincidence of timing. As in previous eras that witnessed expansionist and industrial changes in the land, urban space came to represent all that was environmentally unstable, all that deracinated local, manual, social tradition. These were the Cold War years. The mushroom cloud was the most potent symbol of societal and planetary destruction. Widely publicised cases of industrial poisoning and pollution exacerbated public concern for the environment, and distrust in corporations and governments. Governments, meanwhile, were steadily dismantling welfare systems and prioritising global market competitivity. Rural land, agrarianism, and plant life grew in these filmmakers’ minds as fields for resistance. But with this often visionary pastoral turn came blind spots, including the perpetuation of wilderness myths, classist separations of the country and the city, and essentialising tropes of nationhood based in nature and soil. The legacy of much Land Cinema from this time is precisely such ambivalence. Films testify to both romanticism and resistance. They are a sign of the times and a search for alternatives.

A central question for many of the filmmakers was whether retreat could itself be a form of resistance, and whether cultivating verdant, vivacious places on the land—and a form of cinema to document it—could help counteract its large-scale destruction elsewhere, or at least remedy some of the anxiety induced by such changes. Two filmmakers who believed in the holistic potential of film culture and horticulture are Tait and Robertson. Both women understood the health of the land and its ecosystems as being intimately related to personal and political well-being. Farming, gardening, and documenting these processes in film became, for Tait and Robertson, forms of ecotherapy.

In 1968, Tait returned to Orkney, a windy archipelago off the far north-east of Scotland, where she was born and raised. She had travelled wide, serving as a medic in South Asia during WWII, and studying filmmaking in Rome alongside the political Argentinian filmmaker Fernando Birri, and amidst Italian neorealist influences including Vittorio de Sica. Throughout much of her life afterwards, Tait worked as a medical doctor in Scotland. In her spare time, she made films and self-published poetry and story books. Her return to Orkney was a rejection of urban life (“I had to get nearer the sky,” she wrote in one poem, “For the city was too full of rooms/ And I can’t be content with a window.) Her 1981 film Land Makar is an elegy for a rural Orkney livelihood fast-disappearing. It documents Tait’s neighbour, an ageing woman farmer whom Tait feels is a kindred “poet of the land” (literally, “land makar”) in her manual labour and appreciation of nature. The farmer is unsure about this association, and their divergence of opinion establishes the film’s central question. What makes a poet of the land? Is it to plough it, seed it and harvest it, or to represent it on a page or filmstrip? In foregrounding ideas of perspective thus, Tait invites the question of how people project meanings and values onto land. Land Makar is, in this sense, an ars poetica that likens filmmaking to farming, and embeds Tait in the landscape she loved. In other works, including a four-minute film about Tait’s mother, A Portrait of Ga (1952), Tait similarly naturalises subjects within the surroundings in which they work. She grazes her camera over Ga in close-up, moving between Ga’s tweed-clad shoulders and the garden behind her, rhyming the colours of flowers with Ga’s scarf, the camera acting like a stethoscope that palpates the vivacity of all things. Tait spoke of a desire she harboured as a doctor to write patients not diagnoses and prescriptions but “life certificates.” She used poetry, filmmaking, and their combination (which she called film-poems) to do this. As well as being made for herself and her Orkney neighbours, Tait’s filmic “life certificates” also signify gestures of care to the land.

Robertson spent most of her life in the Boston area. She started filmmaking in the mid-1970s, around the same time as she developed a keen interest in organic gardening, and began suffering mental health issues. Robertson was a vocal advocate of human, animal, and land rights, often writing eccentric environmental protest letters to politicians. Like many in her generation, she pursued various self-help, fitness, and religious programmes. But filmmaking and gardening, she wrote, were what “saved my life.” Robertson’s magnus opus, Five Year Diary, is an autobiographical film which she began in 1981 and ended far later than its title anticipated, in 1997. At over 36 hours of Super-8, the film documents 16 years of Robertson’s life, focusing on the therapeutic effect of gardening during periods of mental turmoil. Robertson’s short films explore topics developed in Five Year Diary. In Melon Patches, Or Reasons to Go On Living (1994-8) Robertson laments not having children, and explores her relationship with anti-psychotic and anti-depressant medicines. Valium transmutes into watermelon seeds in Robertson’s outstretched hand. Through this gesture she exchanges medication for home-grown respite. Her garden is a refuge. “I had no children,” she says. “All I had was a garden with seeds.” Associated with modern science, the pharmaceutical industry, privatised healthcare, and diminishing welfare provision, pills are Robertson’s symbol for her era. They appear in the garden, suddenly and uncannily resembling melon seeds, as a presentiment of history looking up at her, saying “swallow me, cure yourself.” But Robertson is not sentimental about nature. Although she speaks in the Diary of leaving Boston’s “asphalt wilderness” for the large organic vegetable and flower garden she planted at Framingham, Massachusetts, her films qualify, call into question, and bring irony to bear against the illusion of peace in a garden, and in a mind. With wit and poignancy, her films attest to the unending nature of art practice, gardening, staying healthy, and resisting social pressures to conform. As Tait wrote, “the thing about poetry is you have to keep doing it.” Robertson would agree—as would Mekas and Huot, whose film diaries attest to similarly long-term commitments to landscape and nature.

Viewing these films today, alongside those of Creton, Sophie Roger, and other contemporary gardener-farmer-filmmakers, what stands out is the way they represent land as a complex sedimentation of ecological, political, and emotional layers. Turning our attention ‘back to the land,’ the films promise to sharpen our personal and political senses.